Surviving Business Rejections: How To Turn A “NO” Into A Win 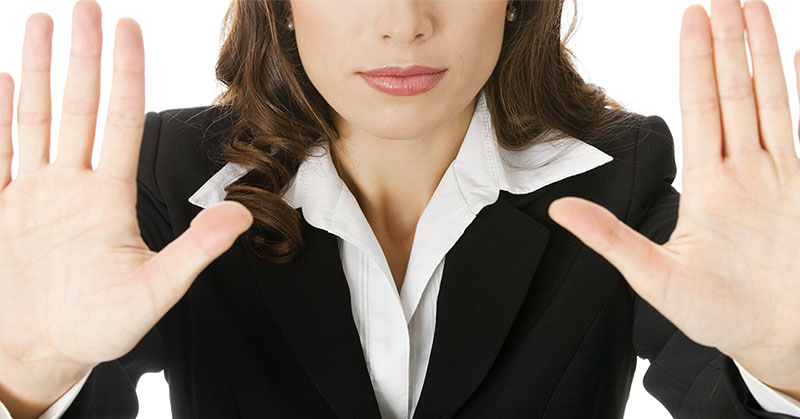 If you’ve hung out here for a while, you’ve learned that when a client or a customer turns you down, it’s usually not about you. Maybe it isn’t their time to buy. Their sense of urgency for a solution might not be strong enough. Many reasons postpone a sale, and a lot them don’t have a single thing to do with you.

But have you ever had what you thought was a sure-fire, in-the-bag, done deal that got turned down flat? Honestly, if you haven’t, I’d be a bit worried. If you aren’t getting turned down on the regular, you probably aren’t asking enough.

The reality is this: you have to ask if you expect to get an answer at all.

When it comes to the sale, you have to ask. You have to give “yes” a chance. And being turned down is NOT the end of the world. In fact, “no” can be music to your entrepreneurial ears if you decide to hear it the right way.

Why is rejection in business actually a beautiful thing?

First, it means that you had the courage to put yourself out there and you followed through. Second, it provides you with feedback about your pitch and your process, which only helps you improve and grow. Most of all, the more you hear no, the closer you get to “yes.”

As entrepreneur Bo Bennett put it, “Rejection is nothing more than a necessary step in the pursuit of success.”

In order to even start on that path, you’ve got to put yourself out there and ASK. Whether you close the deal or get the shaft, you’re going to take a step in the right direction. And if you DON’T ask at all, the game never has a chance to start.

It’s time to ask more often. Get told NO more often. And get yourself closer to the sweet victory of the “YES” a lot faster.

I’m not going to pretend like being refused a sale is fun. Rejection can hit you where you live. Sometimes even the idea of striking out makes you want to cower in the bullpen instead of stepping up to the plate. I get that.

But if you don’t ask at all, rejection is actually guaranteed.

Consider this: when you ask a question, you have a 50/50 shot at getting a yes. But if you don’t, you let the other person answer for you. And that answer is always NO. That’s the difference between a 50% chance at a YES or a 100% chance of a NO.

When you think about it that way, it almost seems crazy NOT to ask everybody, doesn’t it?

So if you ask, you have a 50/50 chance at a sale. If you don’t, then the “nays” automatically have it. Guaranteed.

Still not quite convinced that it’s worth it to take a chance? Here are a few more reasons why the odds shift over to your favor the more that you ask.

According to Gleanster Research, only about 25% of leads in business have a legitimate chance of going the distance and becoming sales. That means you’ll have to talk to a lot more people than you think in order to get to the right people. It also means that it’s totally normal to get turned down a lot along the way.

For that matter, even when you do find the right prospects, sometimes it takes a lot of tries to get a deal on the table at all. It was reported by the Behavioral Sciences Research Press that it can take on average up to 30 calls to even get an appointment with a prospective client. That’s an APPOINTMENT, not even a pitch or a sale.

It’s also about timing. Sometimes even the dream clients will say NO several times before they say YES. Just because you hit a wall once doesn’t mean it’s the end of the story. The only way that the story ends is if you DON’T ask.

My point here is to show you that it takes persistence, consistency, and a LOT of asking to get deals done. Not to mention going through a lot of rejections. That doesn’t mean you’re failing. It means that you’re actually succeeding. Give the numbers a chance to catch up!

But what happens when you get that crushing blow in business that really DOES make it seem like the end of the world? Trust me, even those moments can turn into big wins. That’s what I learned in what was probably the biggest turn-down of my entire business life.

Let me tell you about that one time I went on “Shark Tank.” (Yes, I’m talking about the show!)

Season 4 was accepting applicants, and at the time I was getting my new business, FITzee Foods, up and running. Even though the business was brand new and I was nowhere near ready, I knew I had to take a chance. I needed to get myself in front of world’s most famous bunch of investors and make my pitch. So I jumped right in and got the ball rolling.

When I applied, there were about 30,000 total applicants. Out of that 30,000 businesses looking for a break, only 140 applicants actually got to walk down the aisle and pitch in front of the Sharks. That’s 0.4%, a microscopic percentage.

Most of the time, only about 50% of the applicants that get to that point actually get a deal. On my season, the number of deals was about 37%.

And I was NOT one of the lucky winners.

Now, in all fairness, I probably had no business being there at all, given where I was with the company. I was just getting started. I didn’t even have real products to show them yet, only cardboard prototypes of the protein bars. Not exactly a dazzling beginning.

The pitch itself lasted about an hour and a half. I was walking on eggshells while wearing heels. It was a long and stressful process that ended in a “NO.” And let me tell you, the rejection you get on Shark Tank takes things to a whole new level.

After that happened, I could’ve decided to take my cardboard protein bars, gone home, and hid in the corner for a really long time. I could’ve spent a lot of time feeling regret and embarrassment for even having the gall to show up and ask.

But what happened next was pretty extraordinary.

Through the ultimate shoot-down from the ultimate group of investors, I was able to tweak my pitch. I found ways to improve my presentation. We even got real protein bars! I discovered new ways to communicate the value of FITzee Foods even more clearly, and I found even more ways that my products could improve people’s lives.

I took what I learned and did a massive overhaul on the FITzee Foods presentation. And it helped land me in both Costco and Vitamin Shoppe.

Because I got a big fat NO from the Sharks, I revolutionized my business. I tweaked my pitch, strengthened my messaging, and did the research to learn what my ideal clients and customers really wanted to hear.

It felt like sheer disaster in the moment, but if I never filled out the paperwork, sent in the videos, and showed up in front of the panel to make my pitch, how would I ever have improved? Sometimes the greatest gift in rejection is that it shines a light on the very things that will get you to the next level–including the next “YES.”

But if you never ask, you will never know.

That’s the bottom line. If you don’t ask, nothing gets out into the world. No feedback. No growth. No improvement. And definitely no sales.

“If you aren’t getting rejected on a daily basis, then your goals aren’t ambitious enough.” –Chris Dixon, entrepreneur and cofounder of Hunch.

Am I suggesting with this quote that you should go out seeking rejection? Well, maybe! More specifically, I’m suggesting that you put yourself in the position to either be accepted or rejected on a regular basis. Learn to take the outcome of the question a lot less personally.

Most of all, though, I’m suggesting that you ask.

When you don’t ask, the answer is automatically NO. And I speak for myself, but I’d take a 50% shot at a yes over a 100% guarantee of a no ANY day of the week. How about you?

So, what’s the best way to get comfortable with the question and deal with the outcome, no matter what it might be?

I recommend that you ask for what you want consistently and embrace every answer you receive. Every “no, thanks” is an opportunity to learn. And every “yes, please!” is a celebration unto itself. Don’t miss the opportunity to be grateful for ALL the outcomes.

Ready to get out there and start asking for the “YES” without fear of the “NO”?

Let’s start building that resilience muscle and ensure that fear of rejection never stops you from asking again! Check out this video and my new guide “Surviving Business Rejections: 3 Ways To Turn A “No” Into A Win” and learn how to bounce back, improve, and get back out there if the deal falls flat. Check it out HERE!